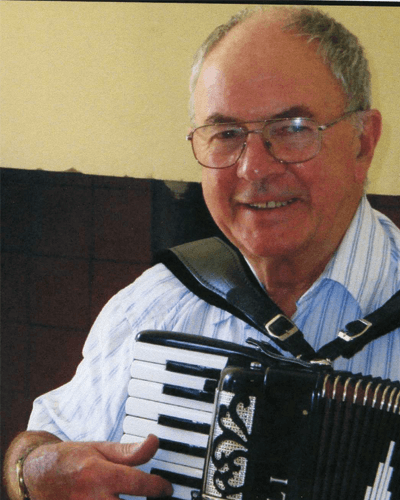 Johnny Handle has been performing since 1953. He plays piano, banjo, bass, guitar, trumpet, Northumbrian pipes and Accordion. Moving from jazz and
popular music to folk in 1958 he founded the first folk song club on Tyneside, and has an interest in local material ever since. His research into North East
collections has enabled him to revive many old songs and inspired him to compose new ones. With the Piano Accordion as his main instrument, he has
encouraged many younger performers, who perform his tunes and songs.
He was a member of the High Level Ranters folk band from 1964, playing at venues throughout Britain, Europe, America and Australia.
With numerous CDs, and Radio and TV broadcasts to his credit, Johnny has gained a reputation as an outstanding entertainer, with his talented playing,
songs, recitations and patter. He has done much work in schools, passing on songs and dances to the next generation. The FARNE website has been brought
about due to his wide ranging study of North East Archives.