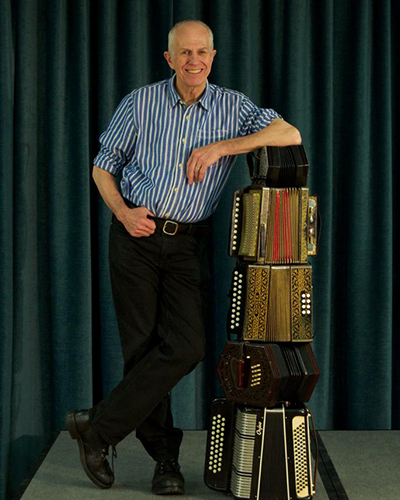 John Kirkpatrick has been dancing, singing, and playing his way around the English folk scene since he joined Hammersmith Morris Men in 1959 at the age of twelve. Displaying a rare skill on a variety of push-pull squeezeboxes – the melodeon, the button accordion, and the Anglo concertina – he has been fully professional since 1970, not only with vast amounts of solo appearances, but also in all kinds of duos, trios, and bands – including spells in Steeleye Span, The Albion Band, Trans Europe Diatonique, Band of Hope, lengthy stints with Richard Thompson’s Band, The Sultans of Squeeze, and Brass Monkey.  In the mid 1990s he led his own John Kirkpatrick Band. More recently he replaced John Tams as the lead singer with folk-rock band Home Service, and now Mr Tams is back in the fold again, the two Johns share singing duties. Since the demise of Brass Monkey, John appears in an occasional duo with Martin Carthy – they were due to do a concert at Whitby Folk Week this year.

John is still an unrelentingly enthusiastic morris dancer, and started one of England’s most influential teams – The Shropshire Bedlams. And he still finds time to play for dancing, currently in a band with all his four sons – Kirkophany.

Out in the wide world John has contributed music, song, and dance to a great number of plays in the theatre, and to a lesser extent radio, television, and film. As a virtuoso session player his squeezeboxes can be heard on hundreds of recordings, and as a creator of new work in all these fields he has established an enviable reputation. But on his own live gigs you’re more likely to see him in his natural habitat pursuing his first love – traditional English music and song.

In 2002 – Made an honorary lifetime member of the International Concertina Association.

In 2003 – Awarded the Gold Badge of the English Folk Dance & Song Society for his outstanding contribution to English Folk Music.