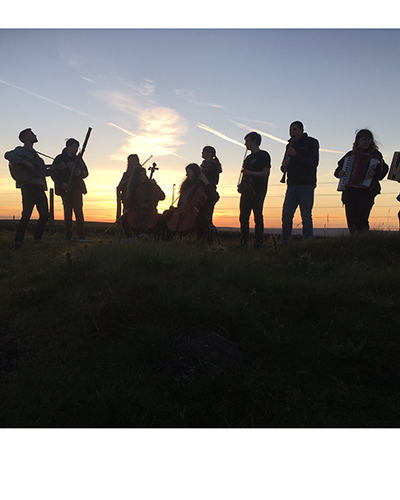 Cream Tees are an award-winning folk band based in Barnard Castle, County Durham. With an ever-evolving membership of young musicians, since their inception in 2011 the group have breathed new life into forgotten folk music first collected in the Teesdale area over the last 150 years by collectors including Ralph Vaughn Williams, Alan Lomax, Joan Littlewood & Ewan MacColl; as well as creating original compositions in the form of The Rooted Suite, gaining incredible encouragement, ideas and support from some of the best folk musicians on the UK folk scene in the process. With past & current members of the band a part of Folkestra and EFDSS’ National Youth Folk Ensemble, and ex-members recently graduating from Newcastle University’s Folk & Traditional Music BA – the band has made a mark on the musical tastes and aspirations of the young people involved.

Cream Tees are no strangers to Whitby, having first appeared at Hartlepool, Towersey and Sidmouth Folk Festival over the last 7 years. Whitby Folk Week is a favourite for the band, so much so it’s officially become their home festival!