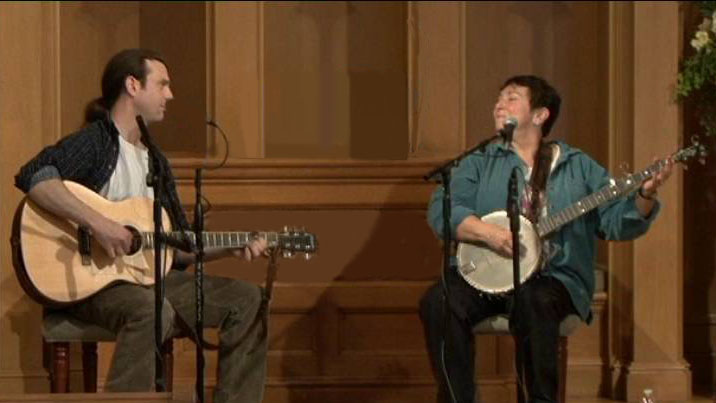 Mother-and-son duo Sara Grey and Kieron Means seamlessly blend their voices in a large repertoire of songs from the U.S., Canada, and the U.K. Their tight vocal harmonies are sung unaccompanied or enhanced by tasteful banjo and guitar arrangements.

Sara and Kieron have that magical vocal blend and rapport that comes from being blood relatives. Both share a deep respect for the sources of the songs they perform, and their accompaniments complement, but never overpower, the lyrics

The songs they sing are mostly traditional, but also include newer songs in the traditional idiom. The duo’s repertoire showcases a wide range of North American folk material, including songs of loggers, songs of migration into the American West, New-World versions of classic British and Irish ballads, old-time Appalachian songs, and gospel music. The two have recorded many albums; 2019 marks the release of their newest CD on the Wild Goose label.

Both mother and son have lived in the U.S. and the U.K., performing and teaching at folk clubs, festivals and music camps on both sides of the Atlantic. Born in New Hampshire, Sara emigrated to the British Isles in 1970, where Kieron spent his childhood and where both became fascinated by the migration of songs between the U.K. and North America. Returning to the U.S. in 2015, Sara now lives in Maine.

Kieron is known both as a fine singer and as a guitarist, whose innovative song accompaniments are inspired by American blues and Appalachian traditions. He lives in upstate New York.